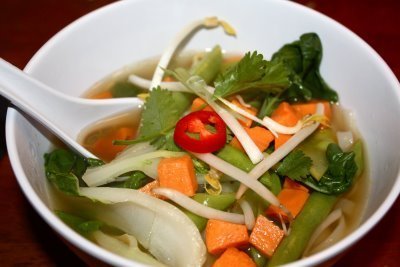 What is Pho??? I honestly had never heard of it, until recently. Our foodie friend, Ben, was coming over for dinner and suggested we make Pho. I was assuming it was a food item, but I really had no clue. He had to explain it:) Once he did, I was sold!

I am sure most of you know what it is, but in case you are unsure here is a little Pho 101. First of all, it is pronounced “Fuh.” It is is a traditional Vietnamese thinly sliced meat and rice-noodle soup dish. The broth is generally made by simmering beef (and sometimes chicken) bones, oxtails, flank steak, charred onion, and spices, taking several hours to prepare.

The spices generally include: cinnamon sticks, cloves, coriander pods, star anise and cardamom. The noodles in Pho are typically rice noodles, dried or fresh. The dish is garnished with ingredients such as green onions, cilantro, Thai basil, fresh Thai chili peppers, lime wedges, and bean sprouts. These items are usually provided on the side. Some sauces such as hoisin sauce and the Thai hot sauce, Sriracha are popular additions as well.

Is everyone feeling educated now? Most of you know we don’t eat beef and are probably wondering why I would try Pho. Well, there are many variations and Ben was nice enough to let us create a vegetarian version. Ben made a homemade vegetable broth for the base of our Pho. We bought the rice noodles and a Pho spice packet from our local Asian Market, you can make your own packets, but this was easier:)

This really was a fun dinner. I enjoyed trying Pho, even if it wasn’t technically the traditional version. The veggie Pho was outstanding. I loved incorporating so many vegetables into the soup and it was fun letting everyone choose their own toppings and flavors.

Would I make or eat this again? PHO SURE! Sorry there isn’t an exact recipe. If you have questions let me know. If you would like to try a traditional recipe, Steamy Kitchen, has a great one on her blog. 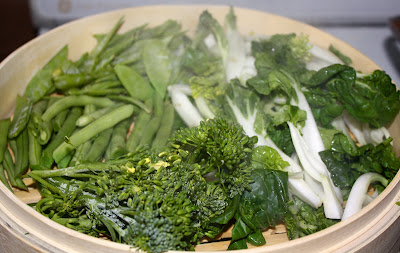 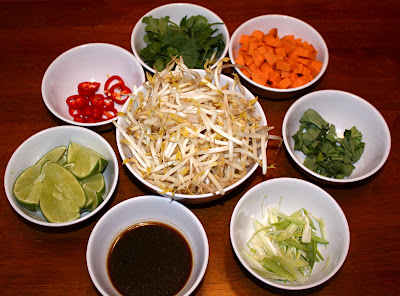 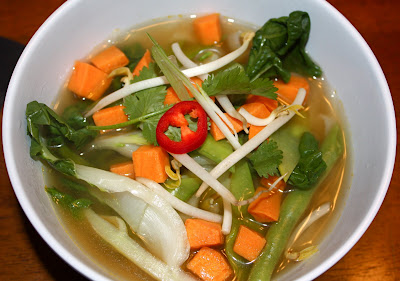 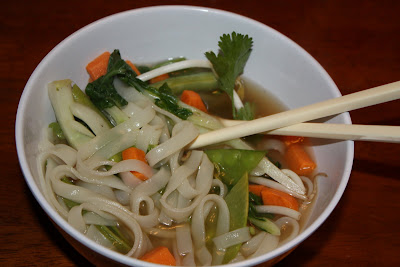