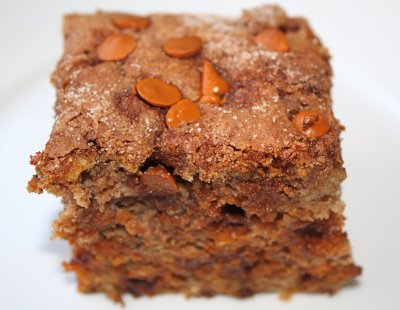 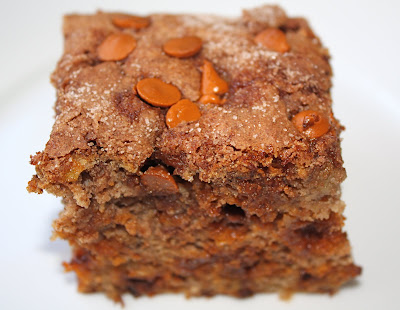 I always have bananas in the freezer. I can never eat them in time…they always turn brown on me! Probably because we buy them at Costco and there are a ton in a bunch…and Josh hates bananas! But the good news is that I get to bake with them!

This time I made a banana snack cake with cinnamon chips. If you can’t find cinnamon chips, I am so sorry! Luckily, I can find them at a couple different stores in Salt Lake. They are oh so good!
I thought the banana/cinnamon combo would be nice and I was right! I love it when that happens:) The cake was really moist…even though there is NO butter or oil in this recipe. I promise the bananas do their thing and the cake has a great texture. I added a cinnamon sugar topping to finish off the cake. I loved the cinnamon crunch it added. If you can’t find cinnamon chips, try chocolate or peanut butter chips, I am sure they would be tasty too!! 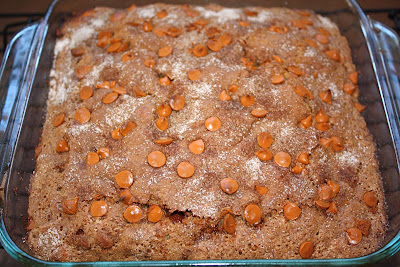 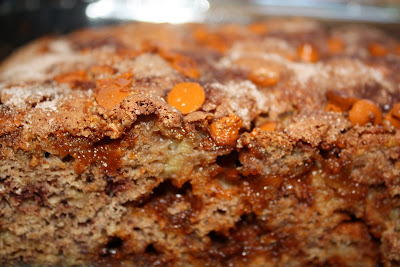 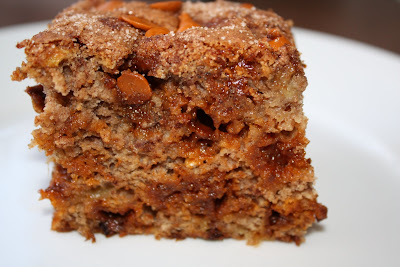 In a medium mixing bowl, mash the bananas well with a fork or potato masher. Add in the eggs and vanilla and mix until combined. Stir in the flour, baking soda, cinnamon, and sugar.
Add ¾ cup of the cinnamon chips, and stir briefly. Pour the batter into the prepared pan, and set aside.
In a small bowl, stir together the topping ingredients. Sprinkle the mixture evenly over the batter in the pan, and top with the remaining ¼ cup chips.
Bake for 35-40 minutes, or until a toothpick inserted into the center comes out clean. Let cool in the pan on a wire rack for at least 15 minutes before serving.