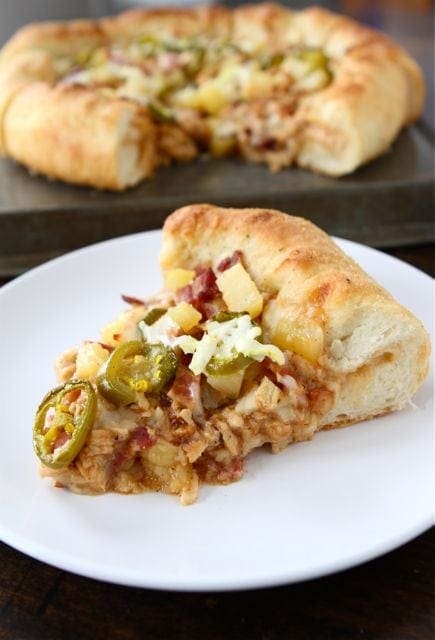 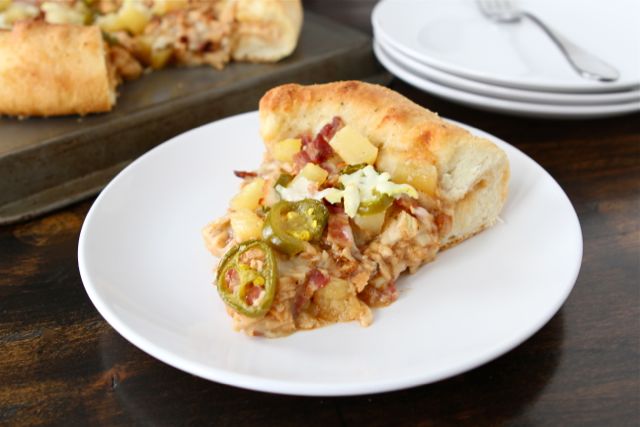 Josh loves pizza and is excited to share his all-time favorite pizza recipe with you today. When he first started making this BBQ Chicken Deluxe Pan Pizza I thought he was weird. The pizza has BBQ sauce and is topped with BBQ chicken, bacon, pineapple, and jalapeño slices. Sounded kind of odd to me, but it is always a hit. I guess Josh knows his pizza:) We host pizza parties at our house with the neighborhood kids and it is always the first pizza to go. Kids and adults love Josh’s special BBQ Chicken pizza. 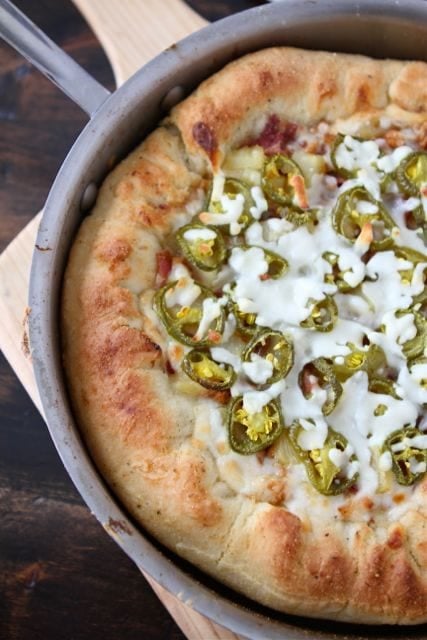 Josh makes the pizza in a sauté pan or a cast iron skillet to give the pizza a thick crust. The dough takes about two hours to rise, so make sure you plan ahead. I promise, it is worth the wait. It is the best pan pizza crust! He rolls out the dough and places it in the pan. He fits the dough to the pan and then cuts off the excess dough. Josh usually makes me a veggie pizza with the leftover dough (yea, he loves me), but you can freeze the dough for later if you wish. The dough freezes well.

Josh evenly spreads BBQ sauce on the bottom of the dough and tops the sauce with mozzarella cheese, BBQ chicken, bacon, pineapple, and jalapeño slices. Don’t worry, he buys the tamed jalapeño slices so no one burns their taste buds:) Bake the pizza until golden brown and let it sit for about 10 minutes before slicing. We use a bread knife to cut the pizza because the crust is so thick, a pizza cutter just doesn’t cut it:)

This BBQ Chicken pizza is perfect for the upcoming Super Bowl. It has game day food written all over it. Josh’s BBQ Chicken Deluxe Pan Pizza is popular at all of our pizza parties and is sure to be a hit at your Super Bowl Party. Grab a slice and enjoy the game! 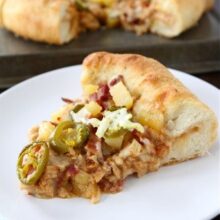