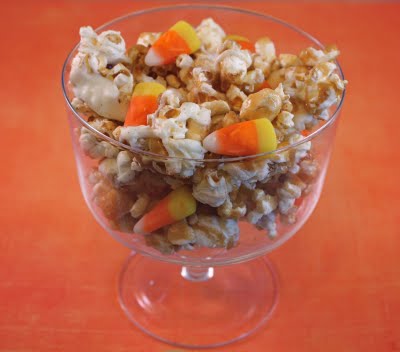 Is everyone ready for Halloween? I hope you have your costumes and candy ready. If you want to make a special treat this weekend try my Cinnamon Sugar Caramel Popcorn and/or Gaby’s Gingersnap Pumpkin Ice Cream Sandwiches! Both are sure to be a hit! I know I am making both:)

I love making caramel corn every fall, but this year I spiced it up a little bit. I added cinnamon and sugar to the mix. I used my basic caramel corn recipe, but went a little light on the caramel. I sprinkled cinnamon and sugar over the popcorn and mixed it well. I drizzled some of it with white chocolate, it was good, but I liked it better plain. This popcorn is a great snack to have around while you pass out candy, carve pumpkins, or watch a scary movie.
It is a low key year for us since we have been working on our basement, but it is 99% done:) We just have to put the furniture back and organize. Josh did an amazing job. He is such a stud:) So no costumes or parties for us, but we will carve pumpkins and pass out treats to the little ghosts and gobblins in our neighborhood. I also plan on roasting pumpkin seeds-the best part about carving pumpkins:)Have a safe and fun Halloween everyone! Don’t forget to visit What’s Gaby Cooking for another tasty Halloween treat! 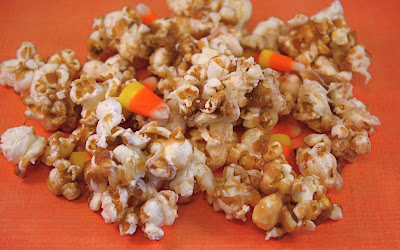 Cinnamon and Sugar mix and white chocolate if you want it

Pop popcorn using your air popper! Spread popcorn out onto two large baking sheets. Make sure it is evenly spread between the two pans.

Melt butter in a saucepan over medium heat. Add in sugar, corn syrup and salt; stir until well combined. Bring to a boil, stirring constantly with a wooden spoon. Once the mixture comes to a rapid boil, let it boil for 5 minutes without stirring. Stir in the vanilla.

Gradually pour the caramel mixture over the popped corn, mixing well on the pans. You can do this in a bowl but why dirty more dishes? I do it right on the pans. Sprinkle popcorn with the cinnamon and sugar mixture.

Bake in preheated oven for about 30 minutes, make sure you stir it often. Maybe every ten minutes or so. Remove from pan and sprinkle with a little more cinnamon and sugar. You can drizzle white chocolate over the popcorn if you wish!


If you like my cinnamon sugar caramel popcorn, you might also like:
Sweet and Salty Butterscotch Candied Popcorn from Picky Palate
Festive Popcorn from Big Red Kitchen
Herbed Buttermilk Popcorn from 101 Cookbooks 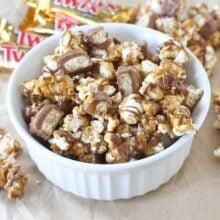 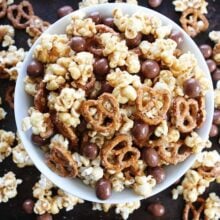 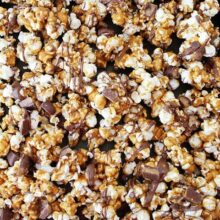 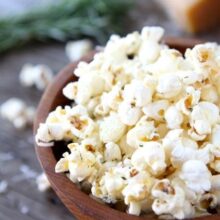