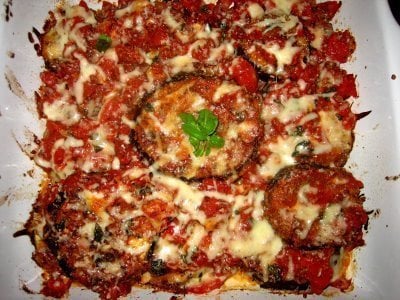 We had an abundance of eggplants to use so I decided to try Eggplant Parmesan. I love it, but not all the calories and fat that come with it. So I played around and tried to make a tasty, lighter version.

First of all, I made my own bread crumbs. I went to the store but they were all pricey and contained hydrogenated oils! I couldn’t find a brand without them. Sad! So I just busted out my food processor and made whole wheat bread crumbs from stale bread we had. They turned out great.

I also used egg whites to dip the eggplants in to save on calories and cholesterol. I used less cheese and broiled the veggies too. My homemade sauce is pretty healthy so I just made a small batch and smothered the eggplant in that. The outcome was delicious and nutritious!

1. Preheat oven to 400°F. Coat two baking sheets and an 8-by-11 1/2-inch baking dish with nonstick cooking spray.
2. Cut eggplants crosswise into 1/4-inch-thick slices. Whisk egg whites and water in a shallow dish until frothy. Combine breadcrumbs, ¼ cup of the Parmesan, salt and pepper in another shallow dish. Dip the eggplant slices into the egg-white mixture, then coat with the breadcrumb mixture. (Discard any leftover breadcrumbs and egg white.) Arrange the eggplant slices in a single layer on the prepared baking sheets. Bake for 15 minutes, turn the eggplant slices over, and bake until crisp and golden, about 15 minutes longer.
3. Make a homemade sauce or use store bought. For my sauce, I sauted onion, garlic, red pepper, fennel seeds in olive oil. I then added 2 cans of diced tomatoes and a tablespoon of tomato paste. Next, I added in fresh basil and Italian seasoning, salt and pepper. Let simmer for a bit. Pour some a little of the sauce into the baking dish. Arrange half of the eggplant slices over the sauce, overlapping slightly. Spoon 1 cup of the remaining sauce over the eggplant and sprinkle with half of the mozzarella cheese and a sprinkle of the parmesan. Add a layer of the remaining eggplant slices and top with the remaining sauce, mozzarella and Parmesan. Bake, uncovered, until the sauce bubbles and the top is golden, 15 to 20 minutes.

We went hiking this weekend and saw a moose! He was stopped in the middle of the trail and he was not moving. We waited for awhile, but he was being stubborn so we had to find another path out. It was a beautiful day to be out and about!