Josh loves and appreciates good food. He is a great cook, baker, and dish washer:) I am lucky I married someone that shares my same passion. Sometimes he surprises me though.

For example, yesterday he bought a fried bean and cheese burrito from the supermarket deli. One of those really gross looking ones. He was so excited. He devoured it in seconds. I was appalled:) I guess I am the “food snob” in the relationship, because he can eat pretty much anything and everything.
He loves monkey bread, store bought biscuits rolled into balls and covered in butter, sugar, and cinnamon. I personally am not a fan of store bought biscuits, homemade is the only way to go if you ask me. But since I love my hubby I sometimes make him his favorite treats, even if I don’t like them.
This time I decided to try monkey bread muffins. I rolled the store bought biscuits into balls and covered them in cinnamon and sugar. I placed them in a muffin pan. I then poured the ooey gooey sauce (butter and brown sugar) all of the balls. They baked up in no time and Josh was in heaven. He loved them. I never tried them, but my brother in law and niece did, they loved them as well.
If you are looking for a quick, sugary breakfast treat, try these. I guess everyone loves them! I will stick to my Fiber One for now:) 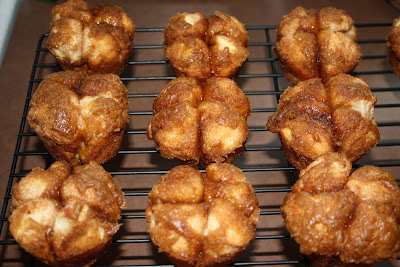 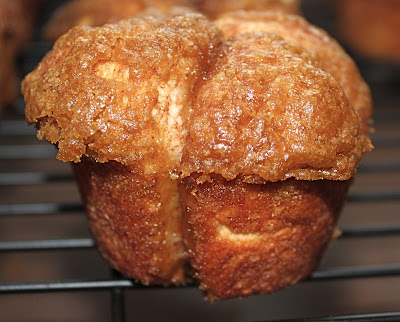 Cinnamon
Sugar
1 stick of butter
1 cup of brown sugar
1. Preheat the oven to 350 degrees. Spray a muffin tin with cooking spray.
2. Cut the biscuits in half and roll the dough into little balls.
3. Combine the cinnamon and sugar. I use extra cinnamon:) Roll the balls in the mixture.
4. Place four balls in one muffin cup. Fill the pan.
5. Melt the butter and brown sugar in a small pot on the stove. Stir until melted and bubbly.
6. Pour the gooey sauce over the muffins.
7. Bake for 10-12 minutes.
8. Cool for a minute in pan. Remove muffins from pan and enjoy.
**If you don’t want to make muffins, you can do a big monkey bread loaf in a bundt pan. Just layer the balls and pour the gooey sauce over them. It will take longer to bake, 35-40 minutes.** 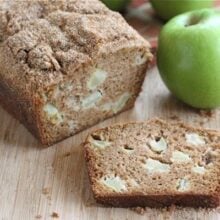 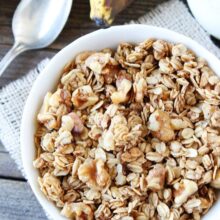