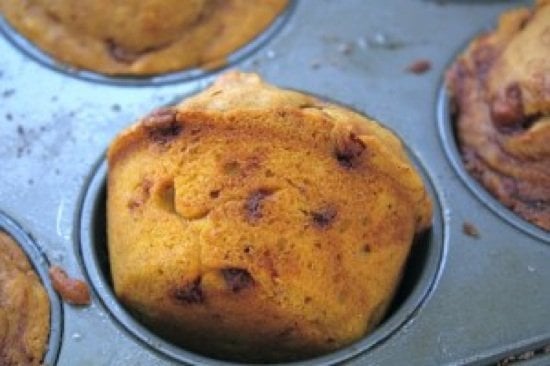 I hope everyone had a fun and safe Halloween weekend. We passed out candy to the neighborhood kids and watched the Utah football game. It was nice and relaxing. I also made Pumpkin Cinnamon Muffins for our neighbors that helped Josh with the basement.

I used the leftover pumpkin in the refrigerator from my pumpkin oatmeal cookies. I decided to add lots of cinnamon and cinnamon chips. I loved making these muffins because they were so easy and I only had to use one bowl. After cleaning up the basement mess, I was not in the mood to do a bunch of dishes:)
The muffins puffed up in the oven and made the house smell like fall. I didn’t get to taste them because we gave them away, but they sure did look and smell good! I hope they were edible. Make a batch and let me know:)
Pumpkin Cinnamon Muffins
(Printable Recipe)
1 ½ cup flour
½ teaspoons salt
½ cups sugar
½ cups brown sugar
1 teaspoon baking soda
1 cup pumpkin
½ cups canola oil
2 eggs
¼ cup buttermilk
1 teaspoon cinnamon
½ teaspoons nutmeg
¼ teaspoons all spice
1 cup cinnamon chips

Preheat the oven to 350 degrees. Grease a muffin pan with cooking spray or line with paper liners.

In a large bowl, whisk together the pumpkin, oil, eggs, and buttermilk. Add in the sugars and stir
until combined. Sprinkle the spices on top and stir.

Add the flour and baking soda to the mixture. Stir until combined. Add in the cinnamon chips. Pour the batter into the prepared muffin pan.

Bake for 20-24 minutes, or until a toothpick inserted in the center comes out clean. Cool the muffins on a wire rack.

If you like these muffins, you might also like:
Pumpkin Pecan Raisin Muffinsfrom Eat Me, Delicious
Pumpkin Oatmeal Muffins from Carrots N Cake
Pumpkin Chocolate Chip Muffins from My Kitchen Cafe
Pumpkin Apple Muffins with Cinnamon Streusel from Two Peas and Their Pod