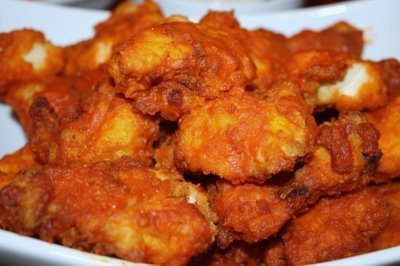 Our dear friend Jason bought us a deep fryer for Christmas. Josh was on Cloud 9! He still is! I appreciate the gift, but a deep fryer? Jason knows I would NEVER allow Josh to buy one on his own, hence the gift. I am a health educator and try to eat healthy most of the time…minus my addiction to sweets:) I do believe in moderation in all things, including fried foods, but to own a huge deep fryer? That is a little much for me. But again, I do appreciate the gift and I am glad Josh loves it! Thanks Jason:)

All Josh has been talking about is frying EVERYTHING…including our breakfast cereal. Don’t worry I didn’t let it go that far:) But Josh did make Buffalo Hot Wings for the Utah game. He was beyond excited. He researched recipes, bought all of the ingredients, and did all of the work. Well, his friend John helped, but I stayed out of it!

He decided to use cut up chicken breasts for the “wings.” He didn’t want any bones to get in the way. He wanted the wings to be nice and meaty! After rolling them in a flour mixture, he carefully dropped them into the sizzling oil! Luckily, he did this outside so the house didn’t stink!

After they were golden and crispy, he added the hot sauce he created. I didn’t taste it but I could smell the fire!! He rolled the wings in the sauce and baked them so they were nice and crisp!

Josh was in heaven! He made sure everyone at the party sampled his wings. He said they were the best wings ever. He is still talking about them:) I am glad he enjoyed them! He did a great job!

Combine flour, salt, and pepper. Dip cut up chicken into flour mixture then dip into buttermilk then back into the mixture. Fry for about 5-6 minutes at 360 degrees or until golden brown on all sides. I used vegetable oil since I am allergic to Peanut Oil.

1 large bottle of Franks Red Hot
2 tablespoons of butter
Add cayenne pepper to taste depending on how spicy you like.

In a small sauce pan put Franks Red Hot in pan melt the butter and then add desired amount of cayenne pepper. Then bring to boil and then simmer for 5 minutes.

After all chicken is fried cover all sides of chicken with sauce. This can be done a few ways. I tried to put in bowl then pour sauce over and mix. I did not like this way because it was to aggressive and damaged the chicken a little. I then laid all of the chicken on a cookie sheet and poured the sauce over the fried chicken. Make sure all of the chicken is well covered. Put the chicken that is on the cookie sheet into the oven, pre-heated to 350 degrees. Bake the Boneless Hot Wings for 20-30 min. or until crispy!