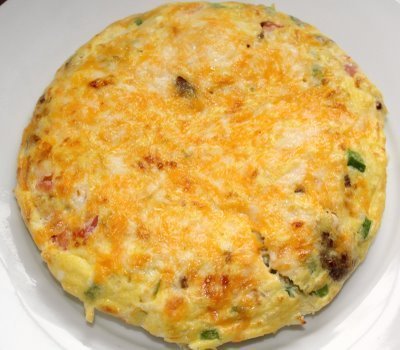 Josh made breakfast for “the boys” when Lincoln was visiting us. He cooked up a sausage, cheese, vegetable frittata. He also made some hashbrowns. I don’t do eggs in the morning, so I had cereal, but I was impressed with the looks of Josh’s fritatta. He did a great job!

Josh fried up some sausage, shredded some Colby cheese, and chopped the veggies. He used green pepper, tomatoes, and onions. He cooked the fritatta in an 8 inch skillet so it would be nice and thick. He started cooking it on the stove top and finished it off in the oven.

If you are an egg lover, give this a try! The boys sure enjoyed their nice, hearty breakfast!

1. Cook the sausage. Shred cheese and chop veggies.
2. Mix the eggs with a little bit of skim milk.
3. Spray a 8 inch skillet with cooking spray. Pour in the egg mixture.
4. Add in veggies and sausage. Let cook for about 5-7 minutes. Until it is almost done.
5. To finish it off, put it in a hot oven that has been preheated to 425 degrees. Cook the frittata for a couple of minutes until it is set.
6. Carefully remove the pan from the oven and sprinkle cheese on top. Place it back in the oven until cheese is melted.
7. Remove frittata from pan and cut into wedges. Serve hot and enjoy!