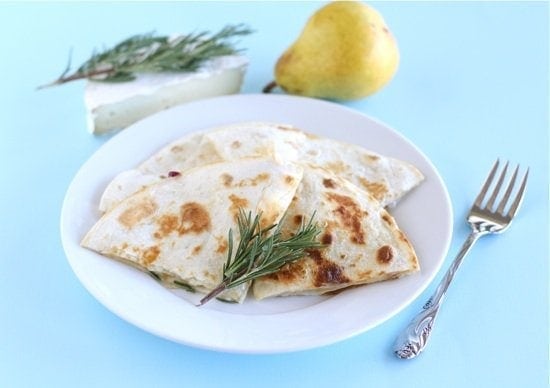 Josh loves quesadillas. I know he likes the taste, but he also likes saying the word. One of his favorite movies is Napoleon Dynamite and he loves quoting the quesadilla line. If you have seen the movie, you know what I am talking about. The other night he requested quesadillas for dinner, I decided to mix things up and make pear, brie, and honey quesadillas. 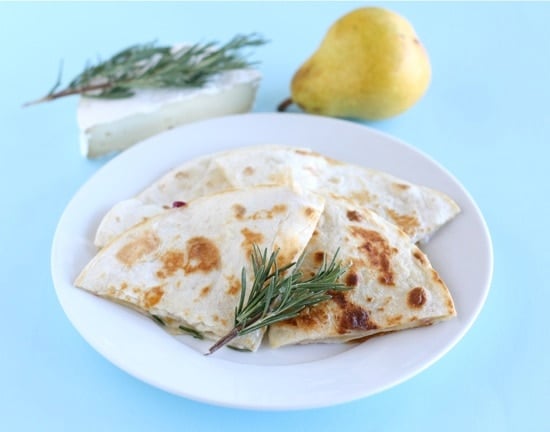 This recipe was inspired by our grilled pear, brie, and honey crostini , that was featured in Salt Lake Magazine. It is one of our favorite appetizers. The flavors are so good together. I had a feeling the same ingredients would taste amazing in a quesadilla, and I was right. The melted buttery brie is topped with pear and red onion slices, a drizzle of honey, and a sprinkle of fresh rosemary. Everything is sandwiched between two flour tortillas. I cut the quesadilla into wedges and the brie and honey oozed out of the side. We got a little sticky, but it was worth it.

Pear, brie, and honey quesadillas make a great appetizer or light meal. They are a little more sophisticated than the typical quesadilla, but still extremely simple to make.

We have some exciting new to share! It’s been a busy week for Two Peas and Their Pod. We were featured on Saveur and CNN’s Eatocracy this week. We are are still pinching ourselves. We are extremely grateful and humbled to be in the spotlight. Thank you for all of your support. We have the best readers and appreciate your continued support with our food blog. 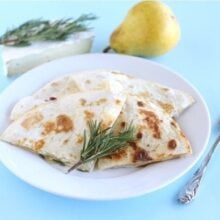 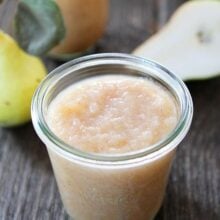 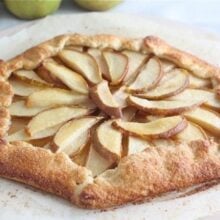 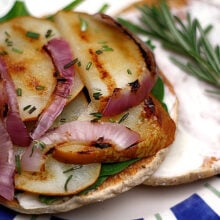 Grilled Cheese and Pear Sandwich with Red Onions and Rosemary