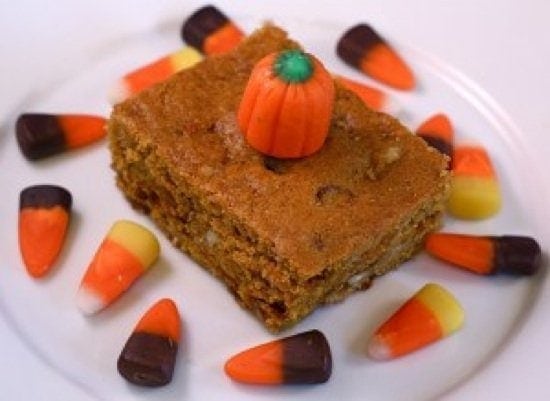 I met Gaby, from What’s Gaby Cooking?, at the Blogher Food Conference in San Francisco. We follow each other’s blogs, we are friends on Facebook and Twitter, and we email, so it was nice to finally meet in person. We have a lot in common-sometimes we post the same or similar recipes without even knowing it:)

We wish we could cook and bake together, but she lives in California and I am in Utah. So every Friday we are teaming up from afar and posting similar recipes. For the next couple of weeks we will be focusing on our favorite fall recipes. Today is Pumpkin Treats-I made pumpkin blondies and Gaby made pumpkin cheesecakes. We hope you enjoy our joint posts.

It’s not fall without pumpkin treats, but there is a pumpkin shortage going on. Aggh! I had to go to 4 stores to find 3 cans of pumpkin. I bought them all. I will have to be very selective on what I bake with pumpkin this fall until the shortage is over.

I started out with pumpkin blondies. Of course, cinnamon, nutmeg, and lots of vanilla were involved. I also threw in cinnamon chips and white chocolate. The blondies were more cakey than a normal cookie blondie, the pumpkin kept them very moist. I loved the cinnamon and white chocolate together too. I highly recommend you try that combination.

We took the pumpkin blondies to our neighborhood party and they were gone in minutes-no joke. Everyone was asking for the recipe. So here you have it! Good luck finding pumpkin-if I see you at the store, I will tackle you for it:)

Preheat oven to 350 degrees. Line bottom and sides of a 9-by-13-inch baking pan with foil, leaving an overhang on all sides.Spray with cooking spray.

In a medium bowl, whisk together flour, cinnamon, nutmeg, baking soda, and salt.
With an electric mixer, cream butter and both sugars until smooth. Beat in the egg and vanilla until well blended. Add the pumpkin puree. Reduce speed to low, and mix in the flour mixture until just combined. Don’t overmix. Stir in the white and cinnamon chips by hand.

Spread batter evenly into the prepared pan. Bake for about 35-40 minutes. The sides will pull away from the pan and brown a bit. Do the toothpick test, if it comes out clean. They are done. Cool completely in pan. Lift the blondies from the pan, using the foil. from pan. Peel off the foil and cut into squares.