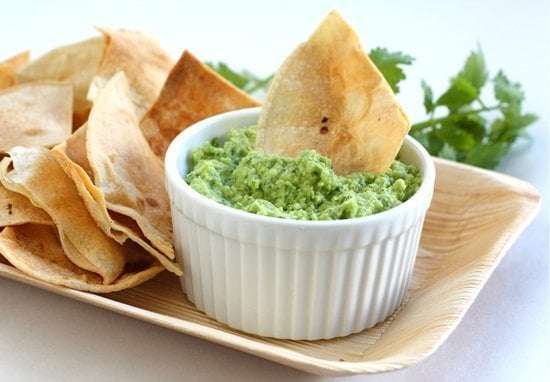 When we go out to eat, sometimes I order an appetizer as my main meal. They are usually the perfect portion size.  Occasionally, we will order an appetizer to share and an entree, if we can agree on the same thing:)  We also like to make appetizers at home for parties, snacks, and even meals. A few of my favorites are  hummus, vegetable spring rolls, and baked zucchini fries. Josh loves to make buffalo hot wings and chicken smothered nachos.

Two appetizers we always agree on are edamame and guacamole. Since we love them both, I decided to make edamame guacamole. Two winning appetizers in one. 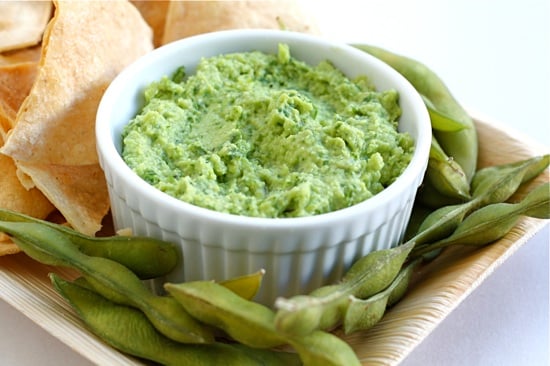 Josh grew up in California and lived in Santa Cruz after he graduated from the University of Utah. He was working and enjoying his bachelor years along the California coast.  Sure, he loved the beach and warm weather, but he really loved California’s fresh produce, especially the avocados.

California is the leading producer of domestic avocados and home to about 90 percent of the nation’s crop. Josh made sure he ate his fair share while he was living there. One day he over did it though. He was craving guacamole and decided to whip up a batch at home. Avocados were on sale, so he went all out and purchased ten. He wasn’t going to use all ten for his batch of guacamole, but after he got mashing, he couldn’t stop. He used all ten avocados and made a monstrous bowl of guacamole.

He sat down with his chips and started to dip. The guacamole was so good, he couldn’t stop eating it. (Josh has no self control when it comes to guacamole and donuts). He ended up eating the entire bowl of guacamole. All of it! Ten avocados in one sitting, not a good idea. He was very sick that night, but if you ask him if he would do it again, he would smile and answer-YES!

Josh was a little hesitant to try this guacamole-he thought the edamame would ruin one of his favorite dips, but he was pleasantly surprised. The edamame mixes in well with the avocado, keeping the bright green color. The guacamole is creamy, buttery, and delicious. Plus, it is good for you! This guacamole is full of protein, heart healthy fat, and fiber. We made homemade baked tortilla chips to scoop up our guacamole.  It is also a great dip for cut up vegetables and I even like it as a sandwich spread.

Edamame guacamole is one of our new favorite appetizers. Josh was tempted to eat the whole bowl, but luckily I was there to stop him. 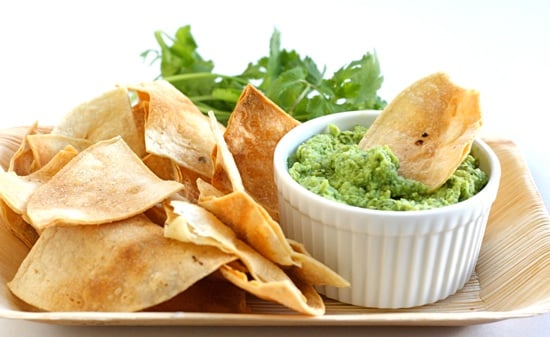 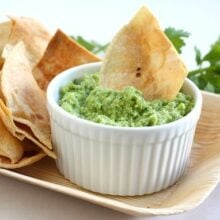