Sausage Stuffing is a delicious homemade addition to all of your holiday meals! Make it from scratch and never go back to the boxed stuffing.

Stuffing is the ultimate Thanksgiving side dish. It is a CLASSIC! People wait all year for Thanksgiving so they can get their stuffing fix. Josh is one of those people, he LOVES stuffing and this Sausage Stuffing is his favorite!

Stuffing from a box is ok, but homemade is the BEST and it’s really easy to make. It just takes a little extra time to put it all together. Before you know it, you have a warm pan of sausage stuffing on the table that everyone is devouring.

This recipe is made with hearty bread and loaded with sausage, herbs, onion, celery, and finished with dried cranberries for a little sweetness. It is a Thanksgiving crowd pleaser!

What Sausage to Use

This depends on preference! You can use a spicy or sweet sausage. If you are going to serve the stuffing to children, you might want to use a mild sausage. Turkey or pork sausage work great! You will need one pound for this recipe. Make sure the casings are removed before you start cooking.

Day old or stale bread is best, but you can dry fresh bread in the oven! Cut your favorite bread into cubes (I like French, Italian, or Sourdough), then lay them out in a single layer on a large baking sheet. Bake 7-10 minutes, until dry and toasted. It works like a charm every time!

How to Make Sausage Stuffing

Can Stuffing Be Made in Advance?

Yes! You can prepare stuffing up to eight hours in advance. If you’ve got a lot going on in the kitchen, prepare the stuffing up to the point where it’s in a 9×13 dish. Cover and place in the refrigerator until ready to bake.

I hope you have leftover stuffing because leftovers are the best part of Thanksgiving, right? Ha! You might want to make extra just in case:) Store cooked stuffing in a sealed container in the refrigerator for 3 to 4 days.

You can also freeze stuffing. Place completely cooled stuffing in a freezer container and freeze for up to three months.

How to Reheat Stuffing

You can reheat stuffing in the microwave or if you are heating up a large amount, you can use the oven. Let the stuffing come to room temperature and then heat in the oven (300 degrees F), covered, until heated through, about 30 minutes. Add a little butter or broth so the stuffing doesn’t dry out.

If you really want to bring the stuffing back to life, try heating it up in a pan on the stove. Melt a little butter in a pan and add the stuffing. You can also add a splash of broth. The broth will add moisture to the stuffing and the hot pan will crisp the stuffing up. It will taste just as good as the first day, maybe even better!

Here are some of my very favorite side dishes to serve at holiday dinners: 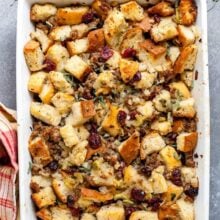 Sausage Stuffing is a delicious homemade addition to all of your holiday meals! Make it from scratch and never go back to the boxed stuffing.
4 from 1 vote
PrintSave RecipeReview
Prep Time 15 mins
Cook Time 50 mins
Total Time 1 hr 5 mins
Cuisine American
Servings 10

Baked Pasta with Spinach and Ricotta