The BEST French Toast Recipe! It Is easy to make at home and the perfect breakfast for weekends or any day! Serve this light and fluffy french toast with butter, maple syrup, and powdered sugar. 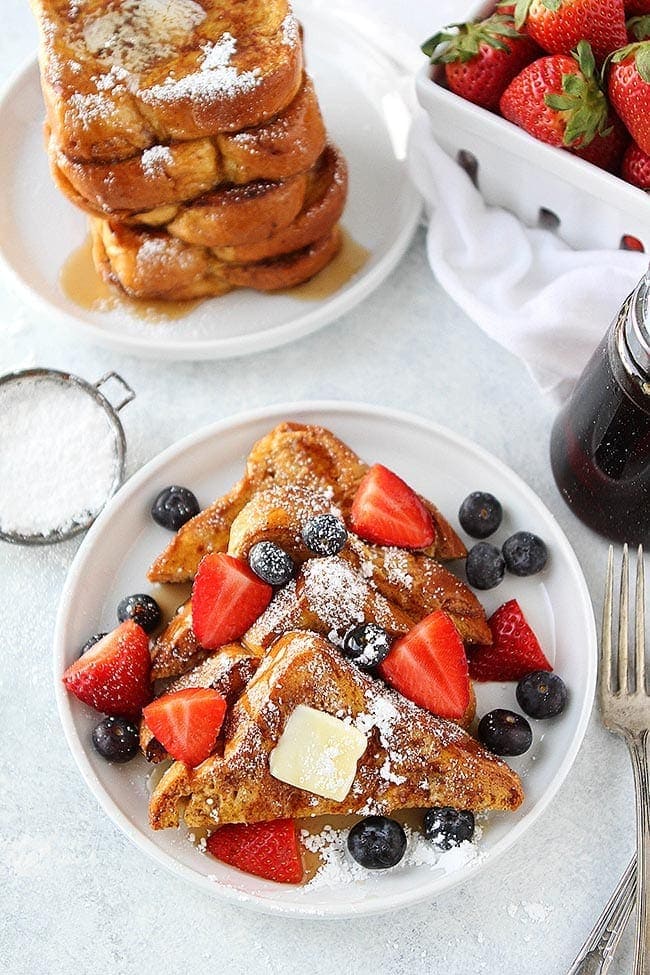 French toast has always been my favorite breakfast. If I have a choice between pancakes, waffles, or French toast, I always pick French toast, especially this Classic French Toast. It is the BEST French toast and today I am sharing all of my tips for making perfect French toast. Don’t worry, it is SO simple, but SO good!

And the best part? You don’t have to leave your house. Sure, I love going out for breakfast, but I would much rather stay in my pj’s and eat a delicious breakfast at home. Homemade French toast is always better, trust me. After you make my French toast recipe, you will be a French toast fan for life. 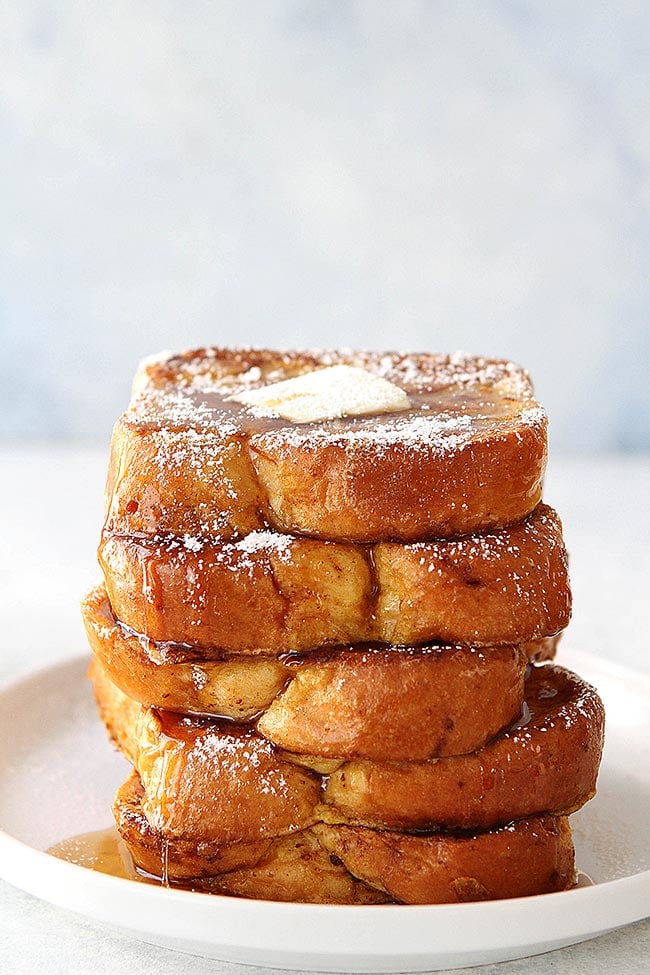 Brioche bread is hands down the best bread for French toast, in my opinion. It is rich, buttery, fluffy, and makes the most amazing French toast. It is definitely a very indulgent bread, but SO worth it! If you want the best French toast, you have to start with the best bread! You can find brioche at most bakeries and some grocery stores carry brioche too. Trader Joe’s sells sliced brioche bread and it is GOOD, our very favorite!

If you can’t find brioche bread, you can use Texas toast, Challah, or French bread. They are all good French toast options.

French toast batter is easy to whisk up. You only need five ingredients and I bet you have all of these in your kitchen right now:

Mix the batter in a shallow pan or pie pan. I mix the batter right in the pan so I don’t have to dirty another dish. You can use a whisk or fork to mix the batter together. Make sure the eggs and milk are thoroughly beaten together.

We use whole milk to make this French toast recipe because the higher fat content makes the French toast nice and creamy. but you can substitute heavy cream, almond milk, or even coconut milk. The flavors will change a little, but the French toast will still be delicious! 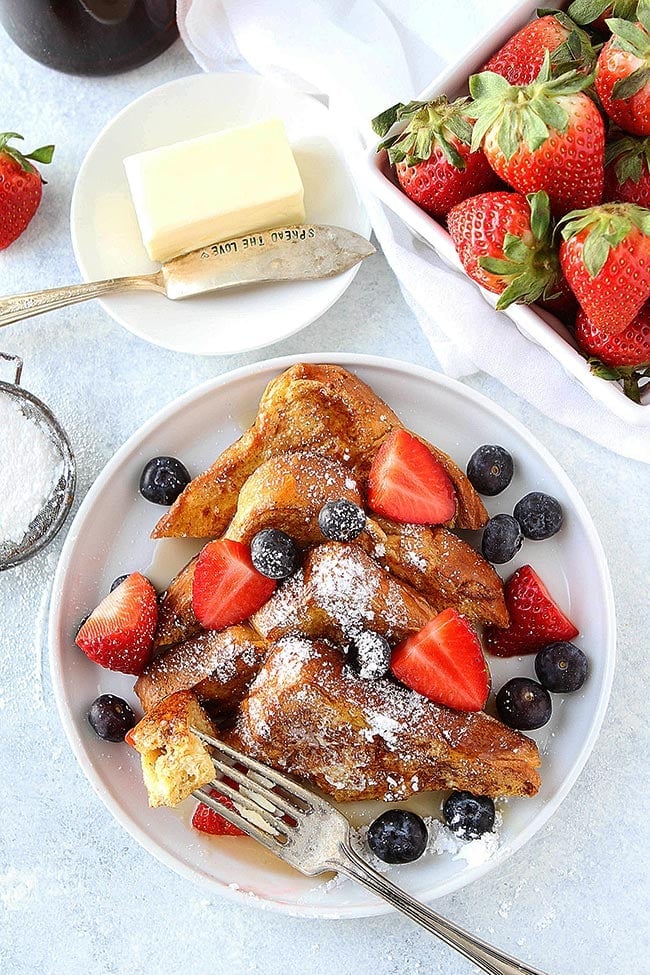 How to Make French Toast

We love to top our French toast with butter, pure maple syrup, and a dusting of powdered sugar. The boys call the powdered sugar snow and they love a good snow storm on their pieces of French toast:) I also like to add fresh berries when they are in season. Sometimes, for a special treat, I will make my Brown Butter Buttermilk Syrup to pour over the French toast. It is so good you will want to drink it:)

The French toast doesn’t need much more, but if you want to go all out you can add a dollop of whipped cream, sliced almonds, candied pecans, a sprinkling of granola, nut butter, banana slices, jam, or even a little Nutella.

What to Serve with French Toast?

This French toast is guaranteed to be the star of any breakfast and it is good on it’s own, but if you want a full breakfast spread, you can serve the French toast with:

You can enjoy this French toast for breakfast, brunch, or even dinner. Our family loves breakfast for dinner, especially when French toast is on the menu. The boys always lick their plates clean:)

See, I told you I love French toast! 🙂 And I know you are going to love this Classic French Toast recipe, it is my absolute favorite! It is perfect in every way, it basically melts in your mouth it is so soft and fluffy. Make it this weekend for breakfast and if you can’t wait that long, make it for breakfast today! It is easy enough to make on a weekday morning too! Enjoy! 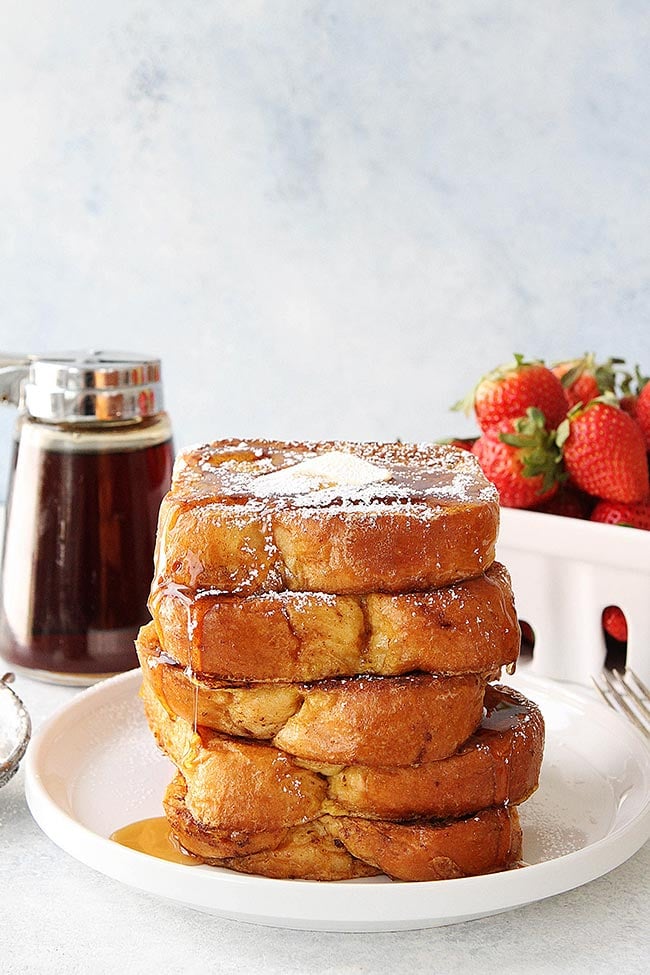 This easy, light and fluffy French toast is a family favorite! Make it for breakfast today!
5 from 7 votes 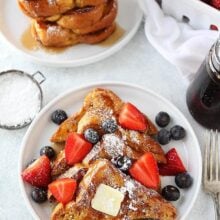 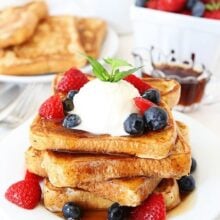 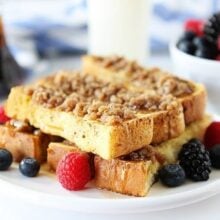 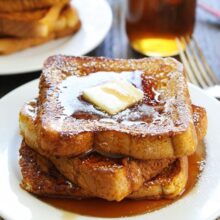 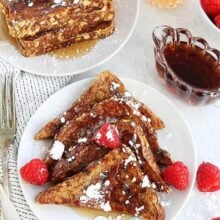